Couldn’t resist this little tale (or should that be tail?). 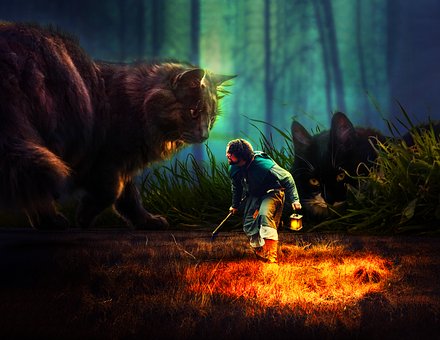 Carter crash landed on K12, which is a planet, filled with women and cats.  The cats on K12 were said to be rather large and so were the women.  He couldn’t believe his bird fell out of the sky above this planet, of all places.

He dug the lantern out of his downed ship and started waking.  It wasn’t long before he saw the first cat.  His grip on the club in his right hand tightened.

“I’ve been in fights before, so come on Big Kitty, show me whatcha got,” he said, softly.

“Mew,” said the cat, sitting in front of him.

“Afraid, are you?” he snickered.

“Meow,” said the cat behind him.

“Two of you?  No problem,” he shouted, brandishing his club.

The cats looked at each…