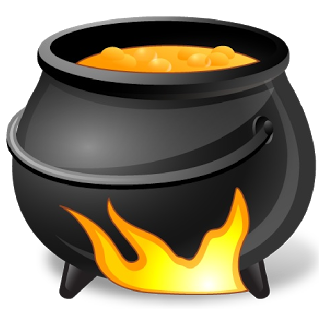 ‘Oh Sparky, what are we going to do?’ Alys wrung her hands as a sludgy yellow substance seeped from the bottom of her cauldron.

It had all been going so well. Business had been brisk following her success with the skin potion she’d made for Agatha of  Aladore*. Agatha had been the subject of a beauty feature in the Weekly Witch, and Alys had also had a spot in the same publication, although the journalist who came to interview her hadn’t been best pleased when she’d inadvertently turned her photographer into a frog.

Alys sighed again and stared mournfully at the leaky cauldron. ‘How much is a new cauldron going to cost Sparky?’

‘I don’t even have the twenty four witch-gilders after paying compensation to that journalist.’ A plump tear ran down her cheek.

Sparky hopped up on her shoulder and nuzzled her neck. He began to weep in sympathy, their tears mingling as they dripped into the leaky cauldron.

Psst-psst-psst! The cauldron hissed. Whooosh! A cloud of blue smoke issued forth from its depths. Ping-ping-ping! A shower of shiny silver objects rained down on the floor.

Sparky hopped down to investigate. ‘Look at this Alys,’ he exclaimed, releasing a cloud of excited steam.

Alys crouched down to look. ‘Coins! Oh Sparky, are they real?’

The diminutive dragon examined the nearest coin. ‘Sure they are!’ He gathered them up. ‘Six hundred and twenty-four witch-gilders!’

‘Exactly the amount we need… but how?’

The cauldron sputtered again and a thick piece of parchment flew out, flapped about and presented itself to Alys. It read: ‘Your cauldron is due for retirement and has bestowed a parting spell. Please treat her kindly in her old age and do not use her as an umbrella stand.’

Alys and Sparky looked at each other. The cauldron gurgled happily and showered them with tiny pink roses.

The challenge this week was catalogue. Photo credit: clipart-library.com
It’s a little longer than the suggested 250 words, but Sparky didn’t want me to leave any of the story out.

*Cooking Up a Storm

21 thoughts on “The Leaky Cauldron”