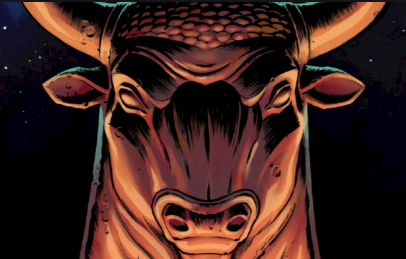 Hound’s eyes glowed red. Growling savagely, he bared his teeth and launched himself at Sinead. But the Hound leapt over her. Sinead spun around.

A hideous bull headed creature filled the passageway behind her.

Jaws snapping, the snarling Hound crashed into the horned monster. The creature grasped the Hound in its great meaty paws, crushing his rib-cage.

Sinead gasped. The monster had been almost upon her and now the Hound was fighting to protect her. She longed for her sword; without it she was powerless to assist.

The Hound fought back, jaws tearing into the creature’s shoulder, but the great beast was stronger, hurling him away. The Hound hit the ground hard; his head snapped backwards. The creature moved in, but the Hound was up again. He leapt into the air and the creature charged, horns gleaming savagely.

Sinead turned away. All she could do was run for her life.

17 thoughts on “The Minotaur of Mandoran”