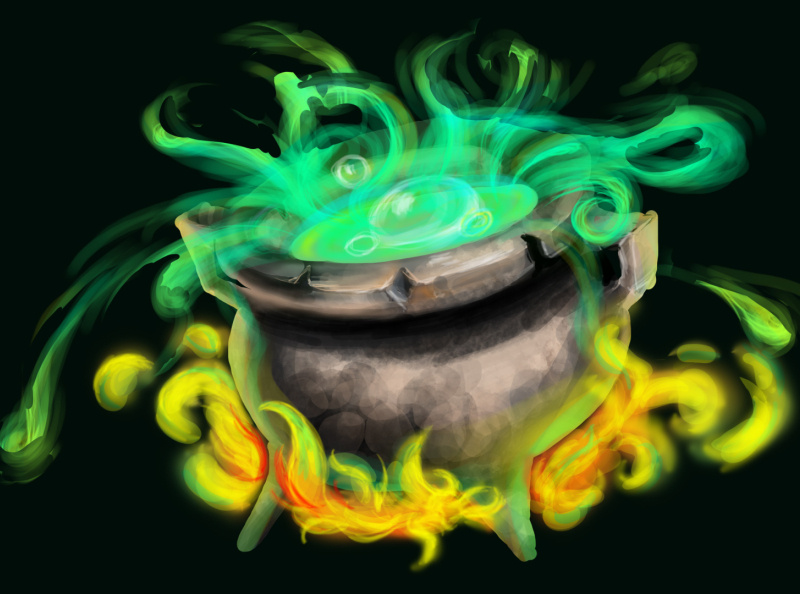 ‘What’s next, Sparky?’ she glanced over at the diminutive dragon who was sitting on his purple haunches reading from the ‘Spell-book of Beauty for Witches’. Just out of her apprenticeship, Alys had been set to work on a particular potion for the Sisterhood.

‘Stop messing, Sparky. Even I know that’s from Mr Shakespeare’s play.’ Alys laughed and flicked the long-handled spoon she was using to stir the pot at her tiny familiar. Small spatters landed on the pages of the spell-book where they sizzled ominously.

Sparky ran a tiny gleaming claw down the text. ‘Add five drops of crocodile tears and twelve drops of tincture of unicorn hair. Stir vigorously sunwise, then add tiny pinches of campfire dust until the mixture begins to glow.’

Alys added the ingredients and stirred.

‘I wonder if it’s supposed to look like that,’ said Alys, peering at the potion. ‘Oh well, it’ll have to do. Agatha of Aladore will be here any second.

Just then, Agatha materialized on the doormat. She grinned, holding out a small copper jug expectantly.

Alys filled the jug, wondering whether any potion could possibly work sufficient magic on Agatha’s gnarled and warty complexion. But Agatha cheerfully smeared the hot gloop over her face.

Her face puffed up like a poppadum. Then, with a loud hiss, the outer skin vapourised. Agatha’s hands flew to her cheeks.

There was a moment’s silence.

Agatha removed her hands. Her face was beautifully smooth. Her eyes shone wide and blue, clashing unfortunately with the colour of her skin which was… GREEN!

Agatha snapped her fingers; a small mirror hovered in front of her.

There was another moment’s silence.

Now I’m for it, Alys thought.

‘I LOVE IT!’ Agatha threw her arms around Alys. ‘Just the right tinge of witchery menace.’ She clapped her hands together. ‘I’ll tell all my friends!’ She tottered onto the doormat. ‘Vogue for Witches here I come!’ echoed her voice from the ether.

Alys held out her hand; Sparky sprang up and gave her a high five.

The challenge this week was copper.
It’s a little longer than the suggested 250 words, but what’s a hundred-ish words between friends?

You might remember that we first met Alys and Sparky here.

25 thoughts on “Cooking up a storm”